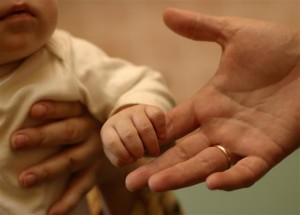 ‍The New Evangelization may be a disappointment when it comes to evangelizing families if it neglects a focus on fathers. The call for a New Evangelization is a desperately needed initiative especially when it is directed at baptized Catholics who are secularized and distant from the Faith. A serious hemorrhage of Catholics, especially youth and young adults, is due to what St. John Paul II termed an “invasive secularism.”Key to the long-term success of an evangelistic effort that results in widespread cultural transformation is the targeting of specific “people-groups” (a term used in missions and in evangelistic planning) that are keys for the conversion of others. In other words, instead of trying to evangelize everyone, the focus is put upon those who in turn will be instrumental in the conversions and reversions of others. As far as I can tell, the key “people-group” for the New Evangelization of families has yet to be identified, namely fathers.Yes, it’s encouraging that we now have annual Catholic men’s conferences in many places, but that’s a long way from a full-court, year-long, and multi-faceted effort at evangelizing fathers.The Southern Baptists, who are effective evangelizers, published these remarkable results from research done by their church resource division: • If a child is the first in the family to become a Christian, there’s a 3.7 percent probability that the rest of the family will become Christians • If mom is the first in the family to become a Christian, there’s a 17 percent probability that the rest of the family will follow • If dad is the first in the family to become a Christian, there’s a 93 percent probability that everyone else in the family will follow his leadI reported similar striking findings in my book, Legacy, from an important Swiss study that asked the question, “What causes a person’s faith to carry through from childhood to adult religious belief and practice?” Here’s what I wrote summarizing the results: “The study found that the one overwhelming critical factor is the religious practice of the father. Dads determine the church habits of their children, and thus, to a significant degree, their eternal destiny.Can’t mom also do this? Shockingly, the study reported that ‘If a father does not go to church, no matter how faithful his wife’s devotions, only one child in fifty will become a regular worshipper.’Yet, ‘If a father does go regularly, regardless of the practice of the mother, between two-thirds and three-quarters of their children will become churchgoers (regular and irregular).’”From these statistics, I can predict that if the New Evangelization fails to focus on fathers it has a great probability of being a failure in re-evangelizing families. On the other hand, the good news is that it’s possible to turn things around if a laser-beam focus is placed on fathers.Unfortunately, many in the Catholic world believe that the greatest need in the Church and in the family is to advance the role of women. Yet, the best way to help young Catholic women is to create a large marriageable pool of mature young Catholic men. It seems that too many younger men are smoking pot, checking off exciting adventures on their bucket list, avoiding commitments to marriage, and playing video games half the night. In a similar vein, the highest need of married Catholic women is to have strong self-sacrificing husbands who are attempting to follow in the footsteps of St. Joseph. So, for the New Evangelization and for the good of women in the Church there should be a prime focus on reaching fathers and fathers-to-be who have an inactive faith.The New Evangelization can’t afford to be blind to the crisis of manhood in Catholic family and church life. Saint John Paul II said, “the future of the world and of the Church passes through the family.” So if we want to change the world, we must transform the family. To transform the family, we must focus on fathers. That’s an uncomplicated, yet highly effective strategy.For the New Evangelization to experience long-term success with entire families it simply needs to recapture an important dynamic from the old evangelization in the book of Acts: evangelize heads of household, then the family follows, and the empire is gradually transformed.When the (Philippian) jailer woke and saw that the prison doors were open, he drew his sword and was about to kill himself, supposing that the prisoners had escaped. But Paul cried with a loud voice, "Do not harm yourself, for we are all here." And he called for lights and rushed in, and trembling with fear he fell down before Paul and Silas, and brought them out and said, "Men, what must I do to be saved?"And they said, "Believe in the Lord Jesus, and you will be saved, you and your household." And they spoke the word of the Lord to him and to all that were in his house. And he took them the same hour of the night, and washed their wounds, and he was baptized at once, with all his family. Then he brought them up into his house, and set food before them; and he rejoiced with all his household that he had believed in God. – Acts 16:27-34This article was adapted from the lead article in the June 2014 edition of the Dads.org e-newsletter. Free subscription sign-up on the lower left of every page on Dads.org.