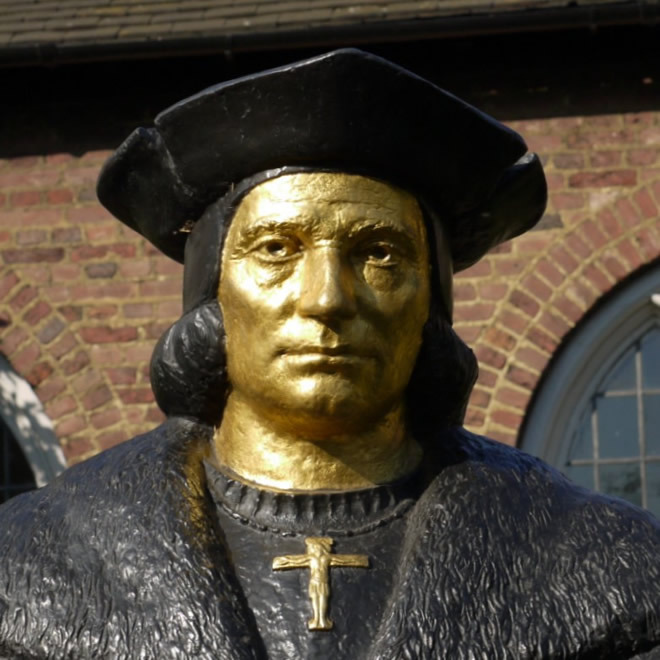 ‍The chief purpose of marriage is the procreation and education of children. Too many Catholic dads dump the entire responsibility for teaching their children onto the shoulders of their wives or teachers. The Catholic Church teaches that mothers and fathers are the primary educators of their children.Thomas More took a keen interest in the spiritual formation and education of his children. He emphasized education in virtue. Unlike some fathers who mistakenly think their child’s educational goal is to get into Harvard instead of heaven, More “put virtue in the first place … learning in the second.”More developed his children's curriculum that included Latin, Greek, theology, philosophy, logic, astronomy, and mathematics. His children were “home educated” by hired Oxford tutors. More’s one son and three daughters were among the best educated in Europe. In an age when women had little in the way of education, More educated five brilliant young women (his three daughters, an adopted daughter, and a ward). His daughter Margaret astounded scholars with her mastery of Latin.The burgeoning Catholic homeschool movement needs to look no farther than to Thomas More (along with St. Joseph of course) as a model for homeschool dads.Despite being such a devoted father, More was not solely occupied with the welfare of his own family. During the famine of the winter of 1528, he fed 100 people a day at his home. More is a perfect example of fulfilling the part of the purpose statement of St. Joseph’s Covenant Keepers that says, “We will show concern not just for our own families. We will also strive for a Christlike concern for the spiritual and material welfare of other families in our communities, in our parishes, and throughout the world” (Christian Fatherhood, p. 33).People often ask me if I think the current Christian men’s movement will be a fad like the many spiritual movements that seem to come and go every few years. I believe those portions of the Christian men's movement that sidestep tough issues such as the indissolubility of marriage and the immorality of birth control will not bear lasting fruit. The other men’s movements that have the courage to stand up for the tough issues, following the example of St. Thomas More did, will bear lasting fruit.The real test of a Christian men’s movement is whether it can pass on the Faith with such strength that it will run down through the generations in families. An authentic men's ministry will continue for generations: “The father may die, and yet he is not dead, for he has left behind him one like himself…” (Sirach 30:4).A glance in the old Catholic Encyclopedia (Vol. X, p. 564 and Vol. XIV, p. 692) showed three entries for More’s descendents. More’s great-grandson was a Jesuit scholar and missionary twice imprisoned for the faith. More’s great-great-granddaughter was a Benedictine nun known for her deep spirituality. The last male heir of the martyr was Fr. Thomas More, S.J., who died in 1795.Fathers today who follow the example of More by courageously living the fullness of the Catholic faith and teaching it to their children by example and by word will see the faith continue long after their lifetime.The fruits of this layman saint’s fatherhood are not limited to a few generations in his family. Saint Thomas More is a father for all seasons, especially in times where the faith and the family are under ferocious attack. More’s fatherhood did not end when Henry VIII had him beheaded. Rather, it took on an increased importance in the life in the Church.I realize that I have only one chance to be a good father. I know that I need to keep the best examples of fatherhood before me. I need to have the greatest saints praying for me. If, by God’s grace, I can incorporate even a fraction of Saint Thomas More's fatherhood into mine, then I have a much better chance of getting it right the first time.St. Thomas More, pray for us fathers.