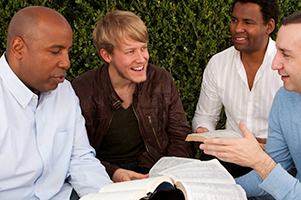 Before starting a Catholic men's group, it's important to consider the purpose and goals.How do we go about establishing the goal of a men’s small group? First, we should be more concerned with strong finishes than quick starts. Jesus said, “I commissioned you to go out and bear fruit, fruit that will last” (John 15:16 - Jerusalem Bible). Therefore, we should set long-term goals. With such goals we work for those things with lasting value. Without a careful consideration of long-term goals, a spectacular beginning may fizzle before a decade has passed.One good way to establish a long-term goal is to simply ask yourself this question, “What fruits do I want to see develop from my men’s group fifty or sixty years from now?” Blessed John Paul II said, “The future of the world and of the Church passes through the family.” Since the key to the future is a family focus, this emphasis should be central in establishing a long term goal for a Catholic men’s group.This brings us to the sixty-four thousand dollar question for men’s small groups: What can our group do that will bear fruit in the lives of our children, grandchildren, and great grandchildren?The several good answers to this key question can generate activity in small groups for years. Yet there is one family-focused small group activity that stands above all the rest in its long-term effects: training fathers to teach the faith to their children.Psalm 78 mentions the powerful trans-generational effect that results from a father teaching his children. This psalm says that when a father passes on the faith to his children he is also passing on the faith to his grandchildren and great grandchildren who are not yet born. How can this happen? A father teaching the faith not only passes on the content of the faith to his children, but he also models the world’s best method for passing on the faith. The deepest and most lasting impact in teaching occurs when there is a strong relational bond between the teacher and student. This is what makes a parent such an effective teacher of the faith. A son will grow up to follow the example of his father and take the time to teach the faith the next generation. This is God’s timeless plan for passing on the faith within a family.In the U.S., the Catholic faith is not successfully being passed on to the younger generation. There are millions of Catholic parents anguishing over the loss of faith in their children. Even with years of Catholic education the Faith is being lost in unprecedented numbers.There is a remedy for the crisis. Psalm 78:7-8 says that if fathers will teach the faith to their children, then the faith will not be forgotten, or cast aside in rebellion. It will stick with their children. Just how effective is this method of fathers passing on the faith? Will it work with all the anti-Christian cultural pressures young people face today?Genesis 18 contains one of the best demonstrations of the principles of Psalm 78 put into action. In Genesis 18:17 God reveals how he is going to bring lasting blessings to Abraham’s family. “I have chosen him, that he may charge his children and his household after him to keep the way of the Lord by doing righteousness and justice; so that the Lord may bring to Abraham what he has promised him.” Abraham (whose name means “exalted father”) is the model O.T. father. God promised to bring covenant blessings to future generations of Abraham’s family as a result of the fathers passing on the faith initiated by Abraham.Someone might respond to Genesis 18 by asking, Isn’t this an outdated four thousand year-old strategy? We are living in the twenty-first century. Take a close look at the context of Genesis 18:19. The verses before and after this verse refer to God’s coming to judge Sodom and Gomorrah. The wider cultural context of the fatherly effectiveness of passing on the faith in Genesis 18:19 is Sodom and Gomorrah. Fathers teaching the faith to their children is what works even when a culture has collapsed. Family catechesis is the special need of the hour.Family catechesis therefore precedes, accompanies and enriches all other forms of catechesis. Furthermore, in places where widespread unbelief or invasive secularism makes real religious growth practically impossible, “the Church of the home” remains the one place where children and young people can receive an authentic catechesis. Thus there cannot be too great an effort on the part of Christian parents to prepare for this ministry of being their own children’s catechists and to carry it out with tireless zeal. Encouragement must also be given to the individuals or institutions that, through person-to-person contacts, through meetings, and through all kinds of pedagogical means, help parents to perform their task: the service they are doing to catechesis is beyond price. (On Catechesis in Our Time [Catechesi Tradendae], Apostolic Exhortation by Blessed Pope John Paul II)How do fathers compare with mothers in fulfilling the task of teaching the faith? A Family in America Survey (Barna) asked parents with children under 18, “Which parent spends the most time discussing religion?” Forty-eight percent of the responses indicated that mothers spent the most time and only eleven percent said fathers did. In light of the fact that Scripture highlights the father's role in teaching the faith, dads have some catching up to do.Is your group following Blessed John Paul II’s exhortation for the restoration of Catholic fathers teaching the Faith to their children?

"Above all where social and cultural conditions so easily encourage a father to be less concerned with his family or at any rate less involved in the work of education, efforts must be made to restore socially the conviction that the place and task of the father in and for the family is of unique and irreplaceable importance." - The Role of the Christian Family in the Modern World, Section 25

Where should the effort to encourage a father's role in education begin? Men’s small groups are the perfect place where assistance and encouragement can be given to fathers to perform the task of catechesis. John Paul II says that a group that performs this task is doing a service so valuable that it is “beyond price.”What are some practical ways a small group can assist in this task?First, select a good curriculum to recommend. The Faith and Life Series is a solid catechetical resource for grade-school children. The teacher’s manuals contain background information, illustrations to use in teaching, the main point to convey with each lesson, and references for further study.Second, it’s essential that you have a live demonstration of a father teaching his children. The majority of Catholic men would never dream of attempting to teach their children thinking it is too difficult. The live demonstration will ease fears and help convince them that teaching the faith is a task that an average dad can accomplish. Do not underestimate the need of anxiety-reducing demonstrations. The number of men actually catechizing their children will quadruple after a demonstration and an opportunity to take a first-hand look at the Faith and Life Series.Third, realize that many men under fifty years old have not received an adequate catechesis themselves. Their hesitancy to catechize will be greatly reduced if you offer them a variety of opportunities to be catechized themselves. For these men it would be wise to make available classes and easy-to-understand materials explaining the Catechism of the Catholic Church. Hint: more fathers will attend such classes if they are “for men only.”Fathers need to be equipped, encouraged, and held mutually accountable in fulfilling their responsibility to educate their children in the Faith. World-changing impact in future generations will come from groups that equip and encourage men to teach the faith to their children.Family Life Center resources for men’s small groups:Christian Fatherhood Study Guide (print & ebook)Legacy Study Guide (ebook)Beginning Apologetics (booklet & study guide)